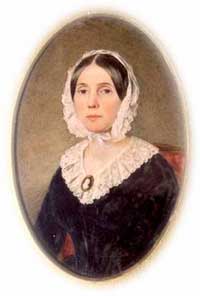 ANSWER: My husband, John C. Calhoun, was Vice President of the United States under both John Quincy Adams and Andrew Jackson. He is one of only two vice presidents to have that distinction. (The other was George Clinton who served under both Jefferson and Madison).
He had a major battle with President Jackson and I was at the center of it. John believed state’s had the power to nullify federal laws, and this issue has returned to the national spotlight 180 years later. James Madison, the primary author of the Constitution, said states did not have that right.
My husband was also Secretary of War during the eight years of James Monroe’s administration, as well as Secretary of State for President John Tyler. He was elected to the U.S. Senate in 1832 and resigned the vice presidency to accept the post.
In 1957 he was selected as one of the five greatest Senators of all time, and their portraits are still on display in the Senate reception room.
Our plantation, Fort Hill, was donated to form Clemson University. We had over 50 slaves and John was a prominent champion of slavery. He did not live to see the Civil War, but I experienced all of it.
John was in the forefront of the opposition to high tariffs because they hurt cotton sales. He often spoke of the 1828 “Tariff of Abominations,” but the revisionist historians are wrong. The Civil War was fought over slavery, not tariffs. Over 600,000 people died in the war, and it was not because of tariff rates.
The woman I did not want to socialize with was Peggy Eaton, the wife of Secretary of War John Eaton. They were married soon after Peggy’s first husband committed suicide. Secretary of the Treasury Louis McLane said Eaton had “just married his mistress–and the mistress of 11-dozen others!”
Eaton and Andrew Jackson were both Senators from Tennessee at the same time, and they lived in the same hotel. It was run by Peggy’s father, and they knew her well.
John and Peggy Eaton made a social call at our home, and I was polite to them. This became a controvery because I never returned their call, which was then the custom in society.
President Jackson was angry with me and the other cabinet wives who followed my lead. In January of 1830, Senator Daniel Webster (Whig-MA) described the so-called “Petticoat Affair” by saying: “that the consequence of this dispute in the social world, is producing great political effects, and may very probably determine who shall be successor to the present chief magistrate.”
The result of all of this was that Jackson fired his entire cabinet in April of 1831. The Petticoat Affair had become a major political distraction.
As Vice President, John cast the deciding vote which denied Martin Van Buren the post of Ambassador to the United Kingdom. It was a mistake which enhanced Van Buren’s popularity, and Senator Webster’s prediction was correct. The cabinet upheavel lead to Van Buren’s selection as the 1832 runningmate. He became President in 1836.
Historian J.H. Eckenrode blamed it all on me, and said I was “vain and silly.” He also claimed I ruined John’s career “at its zenith.”
Mrs. Andrew Jackson died three months before the Inaugural and the President’s niece, Emily Donelson, served as First Lady. Even she would not invite Peggy Eaton to the White House. It only happened after the President insisted. Peggy was attractive and successful with men, but every woman knew she was a nitwit.
Dr. Eckenrode never met Peggy Eaton, who was a woman totally lacking in judgment. After John Eaton died, Peggy, 59, married a 19 year old dance instructor. He ended up stealing her money and running away to Italy with Peggy’s daughter.
Jackson and Van Buren were founders of the modern Democratic Party, and my husband was the titular head of what would become known a century later as its Dixiecrat wing. For eight years I was the Second Lady of the United States, and my name is Floride Calhoun (February 15, 1792 – July 25, 1866).