Trivia Questions: Do You Know Me? 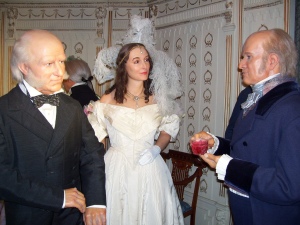 QUESTION: Do you know me? I was First Lady of the United States and had a front row seat for the birth of the modern Democratic Party. In this photo from the National Wax Museum, I am shown with Presidents Martin Van Buren and John Quincy Adams. The White House collection has many priceless paintings but art historians say the most valuable portrait of all is of me!
I was a passionate Democrat, but ironically the issues I was most concerned about (free trade and low tariffs) are today identified with Republicans. I was in the White House in the years after President Andrew Jackson abolished the Second Bank of the United States.
It was a terrible mistake. We had to endure a five-year depression, the failure of many banks and record-high unemployment levels. It was one of the worst economic crises in the nation’s history. If I was with you today, I would tell Rep. Ron Paul (R-TX) that a Federal Reserve is needed. Do you know my name?

ANSWER: At 21, I received many compliments when I arrived in Washington, D.C in 1837. I left my family plantation in South Carolina, which had dozens of slaves, and was a guest of my relative, Senator William Campbell Preston (D -SC). His family was wonderful, but that was not the real reason for my extended visit.
My mother’s cousin was the grande dame of Washington society, former First Lady Dolley Madison. She lived in a Lafayette Square home across from the White House, which still stands. Mrs. Madison was a well known matchmaker, and promised my mother she would be able to find an appropriate husband for me.
My sister married the Governor of South Carolina and I also had high aspirations. I attended school in Philadelphia and my favorite subjects were history and “deportment.” Mrs. Madison advised me to immediately start reading newspapers because “men here always talk about politics.” It was good advice.
I arrived for the 1837 social season, and soon became a fixture at Dolley’s dinner parties. I thought they were fascinating and it was the best education I received. Mrs. Madison did not forget her promise and I was enthusiastic about her first introduction.
Smith Van Buren and I were the same age, and he was tall, handsome and had a good job. His father was the President of the United States, Martin Van Buren. Smith was a nice guy, and I know he liked me, but there was no chemistry between us. One reason was Smith’s lack of interest in politics and current events. If I wanted to talk about horses I could have stayed in South Carolina.
Smith did become my lifelong friend and gave me an excellent suggestion. He said “I really like you Angelica but you would be better off with my older brother Abraham. He lives and breathes politics and he is my father’s top aide.”
I soon met Abram, 31, in the East Room, and Smith’s recommendation was absolutely correct. We had plenty to talk about.
Abram was not as handsome as Smith, but he was far more intelligent. He was a West Point graduate and his classmates included Jefferson Davis (the future President of the Confederate States of America) and Robert E. Lee. We were married 8 months later.
On our honeymoon we met Queen Victoria and King Louis Philippe of France. When we came home we lived in a large room at the White House which is today known as the Queen’s Bedroom. Van Buren’s nickname was “Old Kinderhook,” because he was from Kinderhook, NY. This was shortened to “O.K.” a phrase still in common use today.
The big change was that I began to serve as First Lady for my widowed father-in-law. His wife died two decades earlier, and he was the first President born in the United States. He enjoyed entertaining and I was the center of attention.
The French minister, Adolphe Fourier de Bacourt, was known to be critical of Americans. He said “In any country, Angelica would pass for an amiable woman of graceful and distinguished manners and appearance.” I was certainly more popular than my father-in-law who was defeated after one term.
He is one of only two vice president’s who entered the White House immediately after leaving that office. The other is George H.W. Bush.
My portrait is now seen by every tourist because for over a century it has hung above the mantle in the Red Room. The marble bust of President Van Buren seen in the painting is also in the room. During her televised 2006 White House tour, Laura Bush at first referred to me as Angelica Huston. She did correct herself.
My southern heritage was never a problem. My husband’s family was opposed to slavery, but it was not a major issue during our White House years. In his Inaugural address, President Van Buren acknowledged slavery was legal according to the existing U.S. Constitution.
Like many couples, Abram and I had setbacks along the way. Our only daughter died in the White House in 1840, but I later had three sons. We had a good marriage and I am glad I listened to Dolley Madison.
An episode of the TV program Seinfeld was named “The Van Buren Boys.” Kramer tells Jerry about “The Van Buren Boys” street gang. Jerry asks, “There’s a street gang named after President Martin Van Buren.” Kramer replies: “Oh yeah, and they’re just as mean as he was!” Their signal was to flash 8 fingers because Van Buren was the 8th president.
If you want to learn more about me, I recommend “A Perfect Union: Dolley Madison and the Creation of the American Nation” by Catherine Allgor, Henry Holt, 506 pages (2006).
My name is Angelica Singleton Van Buren (February 13, 1818 – December 29, 1877).

This entry was posted in Martin Van Buren, Trivia Questions. Bookmark the permalink.