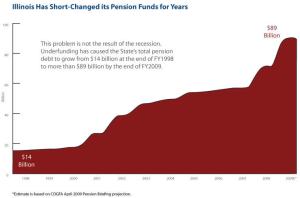 Illinois is the worst credit risk in the nation because for years its lawmakers have refused to adequately address its budget gap.

The Illinois legislature voted last night to increase the state personal income taxes by 67 percent and business taxes by 46 percent. Illinois now has the highest effective corporate tax rate in the industrialized world, and prior to the vote Illinois ranked 48th in job creation. All Democrats voted yes, and all Republicans in both the House and Senate voted no. The Senate passed the measure at 1:30 am by a 30 to 29 vote margin. END_OF_DOCUMENT_TOKEN_TO_BE_REPLACED 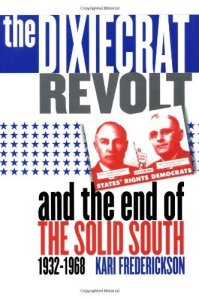 Reviewed by Gregg Hilton
This is an important and thought provoking book. The author is a professor of history at the University of Alabama in Tuscaloosa, and her effort resulted in the Harry Truman Book Award from the Truman Presidential Library. She is a liberal but there is no bias in her account of this period.
The Dixiecrats (or southern Democrats) were predominantly conservative, but the movement also included many racists. She accurately quotes them and that was enough to prove her point. Her account begins with Franklin Roosevelt’s election in 1932, but as she readily acknowledges, the Democratic Party’s Solid South really began with the end of Reconstruction in 1877. END_OF_DOCUMENT_TOKEN_TO_BE_REPLACED 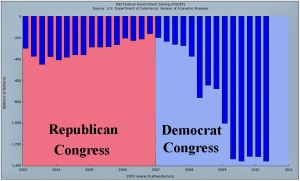 The Republican Party did not realize it then, but they were about to give up power in the House of Representatives for 60 of the next 64 years. On March 4, 1931, Speaker Nicholas Longworth (R-OH) approached the rostrum for the last time. The first person on his feet was Jack Garner (D-TX) who would be his successor. Then every Democrat and Republican stood up and the applause was thunderous. END_OF_DOCUMENT_TOKEN_TO_BE_REPLACED

The End of the Pelosi Era by Gregory Hilton

At noon on Wednesday this sign will be replaced. After a four year absence, open rules and amendments will return to the House of Representatives. The Senate will no longer be run by a series of cloture motions to cut off debate. END_OF_DOCUMENT_TOKEN_TO_BE_REPLACED

Welcome Aboard Walker, We Are Pleased to Have You by Gregory Hilton 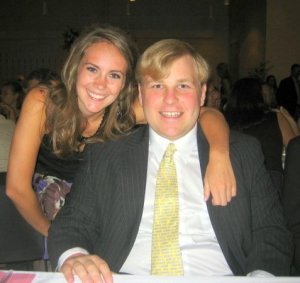 The election was over two months ago but the change continues. Since November 2nd, 22 state legislators have switched parties. Probably the most important was State Rep. Walker Hines of New Orleans. He is only 26, but has been a member of the Louisiana House of Representatives for the past three years.
He represents an urban district which is home to rapper Lil Wayne. END_OF_DOCUMENT_TOKEN_TO_BE_REPLACED

Obama and Reid Now Want to Talk: This is the GOP’s Opening Proposal by Gregory Hilton 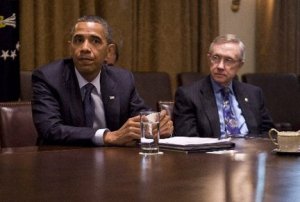 Republicans want to be at the table with the President and the Majority Leader. The GOP will compromise and we have a lot to discuss with them.

A year ago I would not have predicted the re-election of Senate Majority Leader Harry Reid (D-NV). His negative rating was 56% and Nevada had the highest unemployment rate in the nation. Reid portrayed himself as a moderate, but that was difficult to do after he became Majority Leader. Nevertheless, he has now been returned for a fifth term by a comfortable five percent margin. END_OF_DOCUMENT_TOKEN_TO_BE_REPLACED

New Senate Moves to the Right by Gregory Hilton

Majority Leader Harry Reid has offered the Charimanship of the Democratic Senatorial Campaign Committee to Sen. Mark Warner (D-VA). This is a plum assignment with national exposure. Warner briefly ran for president and DSCC would bolster his future prospects. Warner said no because his state lost three Democratic Congressmen and a fourth is ahead by only 820 votes. END_OF_DOCUMENT_TOKEN_TO_BE_REPLACED

The GOP Victory: Real Change is Coming to Capitol Hill and America by Gregory Hilton 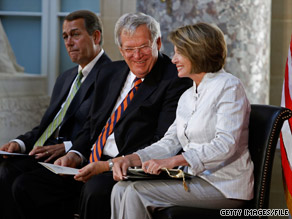 The next House Speaker, Rep. John Boehner (R-OH), is shown with the two most recent Speakers, Dennis Hastert (R-IL) and Nancy Pelosi (D-CA).

Republicans and certain to capture control of the House of Representatives today, while the battle for the Senate will be close. President Obama’s veto power will remain in effect for another two years, but real and substantial change is clearly coming to Capitol Hill and America. The days of the Democratic super majority are over, and the end of the Speaker Nancy Pelosi/Majority Leader Harry Reid era is an enormous positive step for the American people. END_OF_DOCUMENT_TOKEN_TO_BE_REPLACED

Have Democrats Learned Anything From The 2010 Campaign? by Gregory Hilton 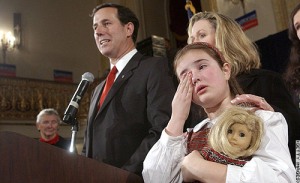 Sen. Rick Santorum (R-PA) concedes defeat in a 2006 landslide. For every candidate who wins an election, there are many losers and families are always impacted.

After enduring the heartbreak of the 2006 and 2008 elections, I have sympathy for what the Democrats will endure tomorrow. I am thrilled for my fellow Republicans, but Barack Obama is still President and he can veto anything they pass. I am also not joining the GOP chorus and predicting the President will be defeated for re-election.
Republicans lost 26 seats in 1982 and Reagan’s approval rating was a dismal 35%. He came back two years later to carry 49 states. Any GOP gloating will be muted by remembering the loss of so many fine statesmen over the past four years. END_OF_DOCUMENT_TOKEN_TO_BE_REPLACED 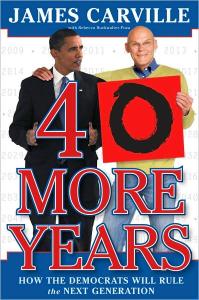 Review by Gregory Hilton
40 More Years: How Democrats Will Rule the Next Generation was published on May 4, 2009, and the author was the architect of Bill Clinton’s 1992 victory. James Carville never imagined that six months after publication Democrats would lose governorships in New Jersey and Virginia, and were on the way to turning over Ted Kennedy’s seat in the U.S. Senate. END_OF_DOCUMENT_TOKEN_TO_BE_REPLACED