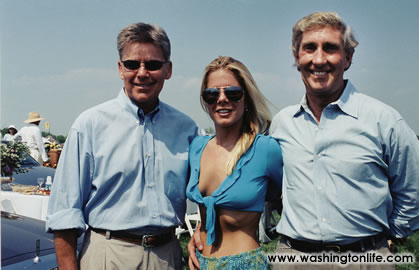 Former Congressman Gary Condit (D-CA) is shown with Andrea Kanze and Chip Dent at the Gold Cup races in 2000.

The 2001 disappearance of intern Chandra Levy will apparently soon be solved. This case dominated the news 8 years ago when the 24 year old was tragically murdered and her body was not discovered for a year. The reason for all of the attention was because of Chandra’s relationship with then Congressman Condit. Many people falsely believed he was responsible for her death.
He lost his Congressional seat, and left California because of the bad publicity. His Baskin-Robbins ice cream shop in Arizona was not successful, and for the past two years he has been writing a book. I was sad to see the photos of him scooping ice cream because it was such a waste of his obvious talent. Condit apparently cheated on his wife with Chandra and several other women who came forward after they were paid by the “National Enquirer.”
Condit… Read More’s personal life is not our business and Mrs. Condit has apparently forgiven him. There were thousands of Condit stories years ago but none of them mentioned his outstanding legislative record.
Condit served in House for 14 years and I knew him as a senior member on the House Intelligence Committee. He spoke out forcefully to stop the genocide and “ethnic cleansing” in the former Yugoslavia. He was also obviously impacted by the genocide in Rwanda, and it was an issue he continued to raise. Furthermore, Condit was the founder of the Blue Dog Coalition, which is the alliance of moderate Democrats. He was one of the few lawmakers who was respected on both sides of aisle and was able to unite the two parties. When Democrats failed to appoint him to a Conference Committee, the Republicans gave him the slot. That rarely happens.