Gov. Scott Walker (R-WI) is shown this afternoon in the dining room of the Executive Mansion in Madison. He is holding one of the six pens he used to sign the first bill to take back power from greedy public employee unions. END_OF_DOCUMENT_TOKEN_TO_BE_REPLACED 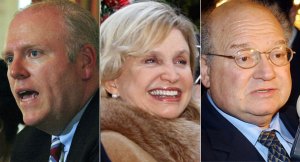 New York has lost two seats and it is likely there will be some combination of the districts of Democratic Reps. Joseph Crowley, Carolyn Maloney and Gary Ackerman. The last time New York had 27 House seats was in the early 1820s, when the chamber had 181 seats. The two upstate districts with the heaviest population losses are in the western part of the state and are represented by Democratic Reps. Brian Higgins and Louise Slaughter. With a Democratic Governor and state Assembly and a GOP Senate, expect each party to lose a district.

Yesterday’s release of the Census Bureau data allows the 2012 Congressional reapportionment process to begin. Drawing the new maps will be the subject of considerable speculation for the next six months. The GOP will gain at least six seats, and they are practically assured of pickups in Texas, Georgia, South Carolina and Utah. Also, several vulnerable Republicans will see favorable territory added to their districts.
The liberal Huffingtom Post does not agree with this assessment. Their current headline article is “Reapportionment Not Necessarily Good News for Republicans” by Robert Creamer. He is the same author who wrote their analysis explaining why Democrats would keep control of the House. END_OF_DOCUMENT_TOKEN_TO_BE_REPLACED