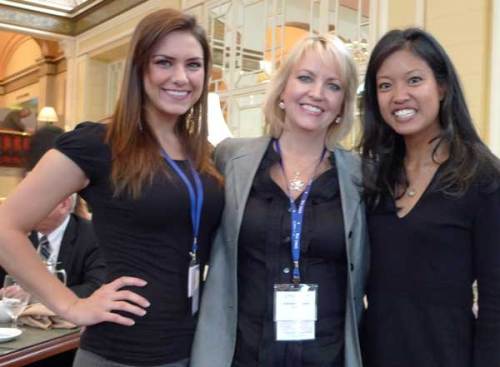 This photo was taken yesterday at CPAC (the Conservative Political Action Conference). That is pundit Michelle Malkin on the right, exactly where she should be!

The news reports about CPAC emphasized the absence of DC’s power elite. CPAC events in the past always included the President, Vice President, Speaker of the House and various cabinet members. That will obviously not happen again for quite some time, but even without any stars they still managed to register over 9,000 people which is a considerable achievement. After being in the doldrums for so many years, there is real enthusiasm on the right. The Obama honeymoon will continue for quite some time, but I do see elements of a GOP comeback. This will not happen if social conservatives are in the forefront, and I was amazed to hear continued opposition to the Brady Bill which passed in 1993. (It requires a computerized criminal background check for all gun purchases). Rush Limbaugh’s speech was televised live on Fox, and he could not have had a more enthusiastic audience. To be frank, I was underwhelmed. The liberals who said they wanted us to lose in Iraq were awful, but Rush is also wrong in saying he wants Obama to fail. I do not want our country to fail.
On the other hand, I was impressed with Michelle Malkin’s presentation which was factual rather than an anti-Obama harangue. She really had my attention in talking about the impact of the new tax plan on non-profits. It would raise an estimated $318 billion over 10 years by, among other things, reducing the value of charitable contributions for people in the highest tax brackets. All of my charitable activities are geared toward major donors, and I believe this will be a direct threat to many major institutions. I was pleased to see the same concerns expressed by House Majority Leader Steny Hoyer (D-MD).
I was not the only person turned off by Rush Limbaugh’s angry tone, and his opposition to bipartisanship. This morning Rep. Eric Cantor (R-VA), the House GOP Whip, was on “This Week” with George Stephanopoulos. Cantor was asked: “So the Rush Limbaugh approach of hoping the president fails is not your approach?”
“Absolutely not, I don’t think anyone wants failure right now. We have such challenges. What we need to do is put forth solutions to the problems real families are facing today. . . There is no question the Republican Party has to return to be one of inclusion, not exclusion. We are a party with many ideas, and a commitment to promoting positive alternatives, if we don’t agree with this administration,” Cantor said.
“Let’s come up with solutions that actually produce results for a change, instead of making matters worse, which Washington is famous for.”