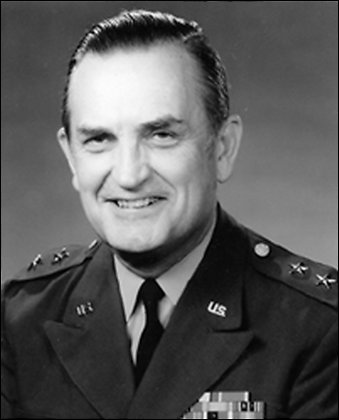 I have been fortunate to encounter many wonderful people in my journey through life. Major General J. Milnor Roberts was always to kind to me, and his obituary is in today’s newspaper. He served on my Board of Directors for over two decades, and supported me when I really needed it.
I last saw him three years ago in the White House when President Bush signed the Defense Appropriations Bill. A painting of Theodore Roosevelt is in the Cabinet Room, and General Roberts told me of his memory of landing in Normandy with Theodore Roosevelt, Jr. on D-Day. Roberts was 26, Roosevelt was 61, and most of the soldiers were 19 and 20. Roosevelt insisted on being in the first boat to hit Omaha Beach despite the fact that he required a cane to walk. Roosevelt died a month later and is buried at Normandy.
Hopefully we will never forget the bravery of Milnor Roberts, Ted Roosevelt and the Greatest Generation who made so many sacrifices for our freedom.

Decorated WWII Veteran Was Chief of Army Reserve by Adam Bernstein, Washington Post
J. Milnor Roberts Jr., 90, an advertising executive promoted to the rank of major general in the Army Reserve who served as chief of Army Reserve from 1971 to 1975, died Jan. 2 at Virginia Hospital Center. He had a kidney infection and pneumonia.

Maj. Gen. Roberts was an Army combat veteran of World War II who participated in the Normandy invasion and the Battle of the Bulge. He served in five campaigns as an aide to Maj. Gen. Leonard T. Gerow. After the war, he became president of the Sykes advertising company in Pittsburgh while holding command positions in the Army Reserve. He settled in the Washington area after being named deputy chief of the Army Reserve in 1970. From 1975 to 1984, he was executive director of the Washington-based Reserve Officers Association.

Afterward, he was president and director of High Frontier, an advocacy group that promotes legislation for missile defense, and held leadership positions in other organizations supporting veterans and national defense. He and his second wife, Priscilla, hosted radio programs for Radio America and other outlets. In 2004 he led two tours to Omaha Beach in Normandy in which he recalled his wartime experiences.

This entry was posted in Notable People and tagged J. Milnor Roberts. Bookmark the permalink.