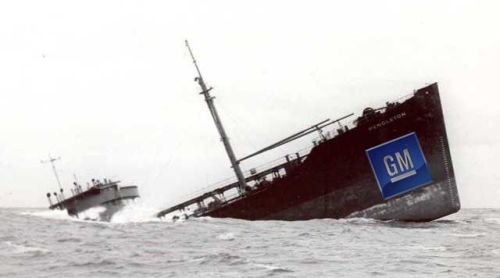 According General Motors own auditors, the world’s largest automaker is on the brink of collapse and bankruptcy. General Motors and Chrysler have received more than $17 billion in government loans and the new U.S. auto task force is now in Detroit to determine if they should receive additional funding. The holders of GM debt would most likely receive 30 cents on the dollar if bankruptcy is declared. Parts suppliers would receive a major blow and retires would see health benefits cut back drastically.
House Republican Leader John Boehner (OH) and Senator John McCain (R-AZ) have both said chapter 11 bankruptcy is the best option for GM. Boehner said GM has avoided tough choices during the past 3 decades and now it should work with employees and creditors to plan a stable future. Anything short of that would be “throwing good money after bad,” he said. GM lost $31 billion in 2008, and it needs $30 billion to stay afloat.
I recently wrote an in-depth analysis of General Motors, and three weeks ago I was asked if GM was a good buy because the stock had fallen so low. Many other corporate icons are in a similar position, and last month I wrote the following:
“We have a saying in venture capital,’The people who make the big bucks are the ones who have the most guts.’ I definitely do not have the guts for a GM buy.
“GM has lost 95% of its value since 2000, and that includes $73 billion in the past three years. The bailout funds should keep GM in business, but if they do go bankrupt shares that are purchased today would be worthless. Even if they stay in business that does not mean the stock will rise. If GM is acquired by another company the stock would be exchanged and it might not be a good deal. The new GM products: CTS, Enclave, Acadia, Silverado, Malibu, and the Hybrids are all hits, but I would not recommend the stock.”
Many analysts are now predicting GM will file a Chapter 7 bankruptcy, meaning that it will be forced into liquidation, not reorganization. GM is experiencing its worst sales slump, and according to Bloomberg, if GM fails, Ford and Chrysler will not be far behind. The total GM loans are in the neighborhood of $50 billion.
The collapse of the big three would eliminate three million jobs, and the loss of just GM would mean a minimum loss of one million jobs. The repercussion to the economy are incalculable. GM has said Chapter 11 bankruptcy — under which the automaker would continue to operate while holding its creditors at bay and overhauling its finances — is not an option because that would scare away customers.
Some industry analysts say doubts about the company’s chances of survival have already driven away would-be buyers, who worry that their warranties might not be honored or that they might not be able to get replacement parts. Chapter 11 bankruptcy may be of little use anyway, because GM may not be able to get the necessary financing to reorganize itself. That could lead to Chapter 7 liquidation, in which the automaker’s assets would be sold off piecemeal.