A Presidential Visit to NYC’s Belasco Theater: Remembering the History of Lafayette Square by Gregory Hilton 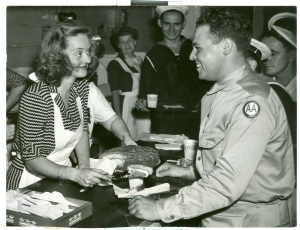 Actress Bette Davis serves cake at the Stage Door Canteen in 1943. The Canteen was located in the Belasco Theater on Lafayette Square, across from the White House.

A Presidential Visit to NYC’s Belasco Theater: Remembering the History of Lafayette Square by Gregory Hilton–
Last night the President and Mrs. Obama had another “Date Night.” This time they visited New York City’s Belasco Theater, and because of the cost, the Republican National Committee criticized the outing. The Obama’s traveled in a small Gulfstream V jet rather than a Boeing 747. I am not joining the critics and the strong marital bond between the Obama’s is refreshing after some of the scandals of the past.
The Obama’s may not realize that for 70 years another Belasco Theater and its predecessor could be clearly seen from the front door of the White House. I first learned about the building in David Brinkley’s book “Washington Goes to War.” The six story structure was demolished in 1964 but it had an important role in DC history since its construction in 1895 as the Lafayette Square Opera House. Over the next fifty years, performers including Sarah Bernhardt, Al Jolsen, Will Rogers, Enrico Caruso, Ethel Barrymore, Katherine Hepburn and Helen Hays would grace its stage. It was the main venue for opera, plays, and ballet at the turn of the 20th century in Washington. In 1906, the Opera House became the Belasco Theater, one of the only venues in Washington to present African American acts to desegregated audiences.
The building had a soaring facade, with Ionic columns framing the main entrance on Madison Place. The auditorium could seat about 1800, and it included three balconies and thirty boxes. Live performances ended in the early years of the Depression, and by 1935 it was converted to a movie house specializing in foreign films. After America’s entry into WW II, the Belasco was reopened as the Stage Door Canteen for the entertainment of servicemen. Admission was limited to enlisted men and non-commissioned officers. The canteen offered servicemen nights of dancing, entertainment, food and nonalcoholic drinks, and even opportunities to hobnob with celebrities and lawmakers. Though the canteen served food to the servicemen free of charge, someone had to pay for it.
DC residents responded generously to appeals for aid. Bette Davis said volunteering at the canteen was one of the “few accomplishments in my life that I am sincerely proud of.” One of the many praiseworthy qualities of the canteen was its egalitarian credo. They were open to all servicemen of Allied nations, and segregation had no place in them.
By November 1945, Stage Door Canteens were operating in eight US cities and London and Paris. Together, they entertained and fed 11 million Allied servicemen. With the war over it was closed at the start of 1946, but it would re-open during the Korean War, when it was known as the Lafayette Square Club, again as a venue for entertaining servicemen. 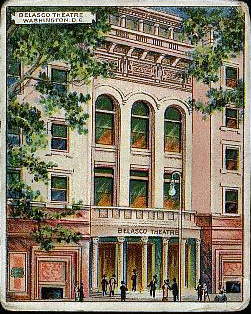 The Belasco Theater was torn down in 1964 and the site is now the U.S. Court of Claims building

In the early 60s, with the reconstruction of Lafayette Square, many of the Belasco’s neighbors were razed, until finally, in 1964, the Belasco itself was torn down to make way for the new US Court of Claims Building.
Before it was a theater: the Rodgers House
The theater was built in 1896 on the site of the 1830s Rodgers House, which was one of Washington’s more famous 19th century residences before its demolition in 1894. The land was owned by Senator Henry Clay of Kentucky who ran for President three times. He traded it to Commodore John Rodgers who constructed a 30 room house in 1831. It was rented by Attorney General Roger Taney, who later served for 28 years as the Chief Justice of the United States. President James Polk was a resident while the White House was being restored.
The building was later a fashionable boarding house and was known as the Washington Club. It was also famously the site of the 1859 shooting of Phillip Barton Kelly, the U.S. Attorney for the District of Columbia. He was the son of Francis Scott Key, and he was killed by Congressman Daniel Sickles. Sickles shot Key, who had been having an affair with his wife, in full view of pedestrians and the White House. The case and subsequent trial of Sickles drew national media attention, further cementing the Square’s image as a neighborhood unlike any other in the country. One of Sickles’ attorneys was Edwin Stanton who would later serve as Secretary of War in the Lincoln Administration.
In a landmark decision, Sickles was acquitted of murder, based on his plea of temporary insanity, which was the first successful use of this defense. Sickles became a general during the Civil War, fought at the battle of Gettysburg and had his right leg blown off by a cannon ball. He had the presence of mind to tell the medical corpsmen to preserve the leg which they did and it can be seen at the Walter Reed Medical Museum in Washington.
After the fateful day in 1859 the Washington Club closed and the next occupant was Secretary of State William Seward of the incoming Lincoln Administration. A former governor of New York, Seward had campaigned for the Republican nomination in 1860 but lost out to Lincoln who promptly offered him the State position. Lincoln constantly visited Seward in his house to seek his advice on the progress of the war. On April 14, 1865 the Rodger’s House again witnessed violence as the site of the attempted assassination of Seward by Lewis Payne, a conspirator with John Wilkes Booth in the Lincoln assassination plot. Payne was hung in the courtyard of Fort McNair in July 1865. Seward survived and in 1867 in the parlor of his home he completed the negotiations for the purchase of Alaska from Russia for $7.2 million.
The last person to occupy the house before it became a theater was Secretary of State James Blaine in the Benjamin Harrison administration. He leased the house in 1889 but tragedy struck again when first his son and then his daughter died in the house within a year. Blaine soon after became ill, resigned and then died in the house in January 1893.