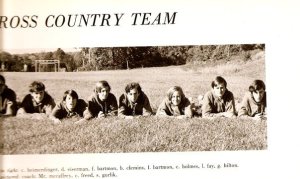 Larry Fay and I are on the extreme right, and as usual, our liberal friend Rich Bartmon is on the left!

“Don’t cry because it’s over. Smile because it happened.” – Dr. Seuss

After a fall on December 13th, Larry Fay of Katonah, New York has died of a brain hemorrhage. His funeral was on Saturday. I met him in the 7th grade and we had many adventures together. We were on the Cross Country team for the next six years where he was the captain and wore number one on his running shirt.
Larry had two homes and was a successful and talented architect from a prominent family. His father who died two years ago was a Goldman Sachs partner during its glory years. END_OF_DOCUMENT_TOKEN_TO_BE_REPLACED