How Do You Get Back at a Woman Who Dumped You? You Could Take Away Her Job! by Gregory Hilton 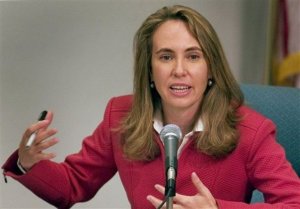 How do you get back at a woman who dumped you? You could take her job away! Rep. Gabrielle Giffords (D-AZ) is being challenged by her ex-boyfriend, former State Sen. Jonathan Paton (R), and he is ahead in the most recent poll. They have known each other for half their lives and he worked for her father's company. Neither of them held office when they were dating, and both are married now.

Another national star of the Democratic Party has fallen narrowly behind. A Tarrance Group survey released today has Rep. Gabrielle Giffords (D-AZ) losing to former State Sen. Jonathan Paton by a 45% to 44% margin. She is the Payday loan heiress and captured what was a GOP seat in 2006. Obama’s disapproval rating in this Tucson district is 56%. If Giffords is re-elected she could challenge the Senate GOP Whip Jon Kyl in 2012. The Arizona media frequently mentions her as the top potential Democratic candidate.
There is also a possibility Kyl could retire, which would make this a major battleground. Arizona is Sen. John McCain’s home, and unlike 2008, Obama is expected to make a vigorous challenge for the state in 2012.
For the past four years, Giffords has portrayed herself as a moderate Democrat. She is a former Republican, a member of the Blue Dogs and serves on both the Armed Services and Foreign Affairs Committees. Her focus on these issues has enhanced her popularity, and is a wise move.
When Gen. David Patraeus recently appeared before a joint meeting of her committees, Rep. Giffords wanted to know what he was doing to combat global warming in Afghanistan. The GOP’s Paton said “Our focus needs to be on preventing Afghanistan from being a training ground for Islamic terrorists, not on installing solar-powered street lights in Kabul.”
Rep. Giffords captured this district primarily because of GOP infighting. Several Arizona Democrats have won for the same reason, most notably former Sen. Dennis DeConcini. There was an upset in the 2006 GOP primary. The Republican nominee four years ago was linked to opponents of civil rights, and the national GOP immediately dropped plans for $1 million in advertising.
Giffords was portrayed as the moderate alternative and easily won this open seat. Her image is now in conflict with her voting record. She supported the stimulus, cap and trade, and Obamacare.
Her campaign has a full time camera crew that continually follows her former boyfriend. Paton was an Army intelligence officer in Iraq and has been endorsed by FreedomWorks and Rep. Jeff Flake (R-AZ). He faces an August 24th primary with fellow Iraq War veteran Jesse Kelly, 28.
Kelly is not a college graduate and it will be difficult for him to attack Giffords on the stimulus because his family construction business has been a significant recipient of stimulus money. Paton helped to pass the largest tax cut in Arizona history but Kelly has been endorsed by the Tea Party, Citizens United and five Members of Congress including Reps. Mike Pence (IN) and Todd Franks (AZ).
Paton could definitely lose the primary.
He is trying to establish his conservative credentials by endorsing Rep. J.D. Hayworth over Sen. John McCain, but this could backfire because the Senator is expected to win in Tuscon. Whoever wins the primary will be well funded. It would be far better to stop Giffords this year rather than seeing her as a statewide candidate in 2012.

This entry was posted in Arizona, Tea Party. Bookmark the permalink.