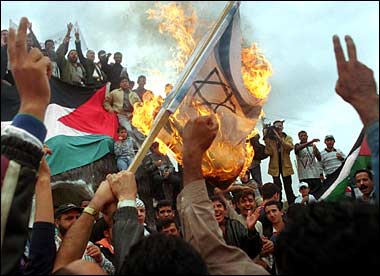 The burning of an Israeli flag was typical of the protestors

President Obama made the correct decision in keeping the U.S. out of the UN’s “World Conference on Racism.” It turned out to be anti-Semitic and anti-American hate festival. Obama’s action was criticized by the Chair of the Congressional Black Caucus and Human Rights Watch, but George Bush came under far stronger attacks when he did the same thing in 2001.
The difference between the 2001 and 2009 conferences is that the news media did a far better job of exposing the lunacy of this event. Obama was right not to legitimize this conference with US participation. It is also encouraging to see the Obama Administration opposing the simplistic notion that “engagement” is always preferred. Zvika Krieger of “The New Republic” has done an outstanding job of reviewing both conferences: http://www.tnr.com/ A large percentage of the U.S. Congress did not want to see a replay of 2001. Last week a bipartisan group of House members sent a letter to Obama congratulating him for deciding to boycott the meeting, which began on Monday.

“We applaud you for making it clear that the United States will not participate in a conference that undermines freedom of expression and is tainted by an anti-Zionist and anti-Semitic agenda,” said the letter signed by seven members of Congress. Israel and several Jewish advocacy groups urged the United States and other nations not to take part in the conference. Canada, Australia and Italy did not attend because of similar concerns.