The Threat Closer to Home: Hugo Chavez and the War Against America 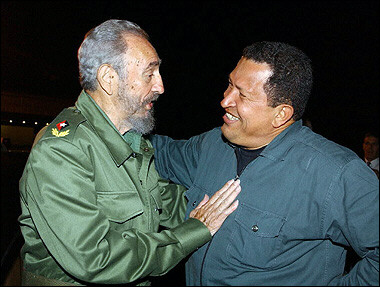 Book Review by Gregory Hilton:  The Threat Closer to Home: Hugo Chavez and the War Against America by Douglas Schoen and Michael Rowan

This just hit the bookstores and it has a powerful message which is unfortunately being ignored. Hugo Chavez, the President of Venezuela, has publicly said he wants to bring America to its knees. Already partnered with Cuba, Nicaragua, Bolivia and Ecuador, Chavez is now financing movements to subvert many other Latin American nations.
Fortunately the dramatic drop in oil prices has significantly curtailed Chavez’ ability to export revolution. The Venezuelan public is questioning why the nation is bankrolling other countries when there is so much suffering at home. Under Chavez, Venezuela, once Latin America’s healthiest economy, now has the highest inflation rate and the lowest economic growth in the western hemisphere.  There are long lines at the government run grocery stores and meat is now considered a luxury.
Ironically, Chavez has turned Venezuela from an oil exporter to an importer.   He long ago squandered the country’s huge cash surplus, and most of money went to foreign revolutionary causes.  Venezuela’s armed forces have grown dramatically during the Chavez era.   The situation is now so dire that he has borrowed more than $12 billion from the International Monetary Fund.
The co-author is Dr. Douglas E. Schoen, Chairman of Penn Schoen Associates, one of the most respected Democratic Party consulting firms. According to Schoen, “Chavez has more modern weapons than anyone in Latin America. He has strategic alliances with Iran, North Korea, and other enemies of America, yet he has duped many Americans — from influential political and cultural leaders to ordinary citizens who benefit from his oil largess through his state-owned oil company — into believing that he is a friend.”
The Chairman of the House Armed Services Committee, Rep. Ike Skelton (D-MO), clearly understands the threat and the importance of this book.  He recommended the book by saying, “It’s time to pay attention to the alarm bells; we should engage with our southern neighbors to address pressing security threats across the hemisphere, including those from Caracas.” I hope this book has a significant impact on Capitol Hill, with the new Administration and in the news media.

This entry was posted in Foreign Policy. Bookmark the permalink.